On a short day session fishing on the Maeklong after a highly productive six days stingray fishing the Ban Pakong River.
Rick, Boy and Ow visited the tidal river in search of Giant freshwater stingray.
The Maeklong river with extremely low water levels was far from ideal conditions for the capture of this highly elusive predatory species.
Stingray Fishing in the infamous Area 51 section of the tidal river close to the town of Amphawa the anglers spent an uneventful day offering livebaits in an attempt to induce a take from this mysterious predatory fish.
After capturing several plastic bags and the absence of any tidal influence the anglers resigned themselves to a blank.
With the light fading and the onslaught of darkness a small run developed, after winding down into the unseen predator a gentle thumping sensation was felt somewhere deep below. Within a matter of minutes a small Giant freshwater stingray was brought to the boat easily subdued with the heavy tackle.
After a few quick photographs the juvenile was slipped back into the river.
The fish was estimated to weigh a mere 12 kg (25lb).
Yet another capture of a highly understudied and nomadic species by the Fishsiam team. 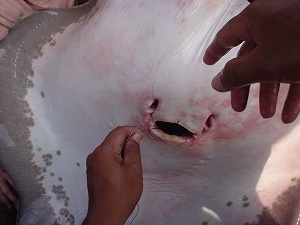