An early start saw the Fishsiam team once again fishing the Maeklong River in Samut Songkran Thailand.
After fishing for only a few hours a tapping on one of the rods indicated a Giant freshwater Stingray had picked up the bait.
Winding down into the fish resulted in the tip of the rod being wrenched down towards the surface violently as the unseen Giant freshwater stingray made a powerful lunge.
With the stingray buried deep beneath the muddy riverbed continued pressure was constantly applied with the rod in an effort to extract the prehistoric predator from its underwater lair.
After almost ten minutes of constant pressure the fish emerged from the riverbed where it proceeded on a series of powerful runs deep beneath the boat.
Seconds later a Giant freshwater Stingray was violently thrashing on the surface as the team quickly secured the monster fish.
The fish was transported to the research area at the riverside where Dr.Zeb Hogan conducted a scientific examination.
The Giant freshwater stingray was weighed at just over 50kg’s and numerically tagged before being released by Dr.Hogan.
With the river still displaying perfect fishing conditions the team returned to the river to continue fishing.
The rods were repositioned several times over the next few hours due to submerged weed and refuge continually fouling the lines.
With the river system holding large amounts of floating debris fishing was far from easy and required the team to reposition the rods at regular intervals.
During a brief spell of clear water one of the rods received a blistering take!
Instantly the fish powered off with the bait on a twenty yard run causing the anglers to suspect a much larger fish than the previous capture.
After winding down into the unseen predator it soon became clear that the fish was not of a particularly large size as previously thought.
Continued pressure soon saw the Giant freshwater stingray winched up from the depths where it was soon brought to the surface next to the boat.
The small male Giant freshwater stingray dangerously flailed its tail around whilst the team attempted to secure it.
After safely securing the Giant freshwater stingray it was transported to the riverside where Dr.Hogan carried out a scientific examination.
The fish was measured at a width of 1m and tagged with a numeric tag before once again being released to the river. 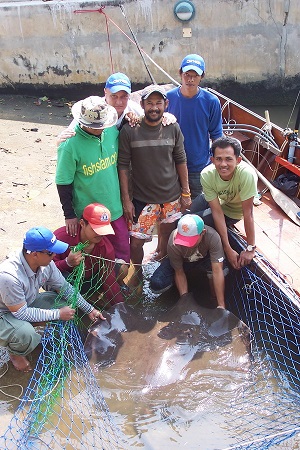