Giant Freshwater Stingray fishing River of the Dragon in Thailand

FishSiam pro-guide Ohm fished for Giant freshwater stingrays at the Ban Pakong River known commonly amongst the locals as the River of the Dragon.
Utilising his intimate knowledge of the Ban Pakong River Ohm whilst Giant stingray fishing soon hooked into what could be described as a freight train! After a grueling forty minute battle which saw the prehistoric fish clamp onto the riverbed on numerous occasions, a huge Giant Freshwater Stingray was finally brought to the bank. Without scales on site a conservative estimate was placed on the Giant freshwater stingrays weight in the region of some 75kgs. 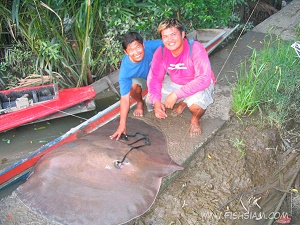