Yet another FishSiam Giant freshwater Stingray fishing expedition to the mighty Maeklong River saw Koto San a long term friend and returning client make his first trip to the Maeklong River. The Japanese business man and a friend joined Boy on a visit to the infamous Area 51 stretch near Amphawa.
As the light began to fade and the tidal river was at its highest Koto San hooked an unseen monster which powered off towards the main flow! After a dogged thirty minute battle an estimated 30kg Giant Freshwater Stingray was pulled into the boat. The Giant freshwater stingray was identified as being a small female. The anglers were aided by Sa and Pak invaluable members of the FishSiam team 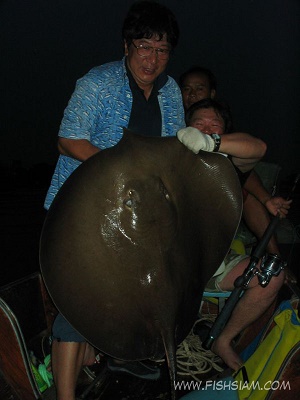