The German angler did not have long to wait before a knocking on the rod tip indicated the presence of a Giant freshwater stingray. After winding down into the fish the angler was greeted by a solid weight which arched his rod into its full parabolic curve. The well built German angler skillfully bent his rod into the fish exerting maximum pressure on the unseen predator.
After ten minutes of constant pressure the fish was suddenly moved from the bottom. Peter immediately switched into second gear on the multiplier in an attempt to gain ground on the fish.
Moments later the fish was brought to the surface and safely brought into the folds of the net. The fish was quickly brought to the riverside before photography and scientific data were recorded.

The small male Giant freshwater stingray was estimated to weigh 45kg and was released soon after capture.
With the tide already beginning to recede the angler retired to his hotel accommodation in the knowledge that the next tides would be arriving in a few more hours.

A few hours later Peter returned to the Maeklong River. Fishing in a different area the angler soon had all rods in position in readiness for more Giant freshwater stingray action.
An hour into the session another take saw Peter once again bent into another freshwater stingray.
In almost a carbon copy performance of the previous capture the German angler proceeded to extract the freshwater predator in a relatively short fifteen minute duration.
The fish was once again netted and brought to the riverside where it was identified as being another male of an estimated 50kg’s.
After recording scientific data and measurements the fish was released and fishing commenced once again.
With only another hour or so left of fishing before the tides receded the angler wasted no time in hooking yet another freshwater stingray.

The fish on this occasion took slightly longer due to it being a female of a slightly larger size.
After a twenty minute battle the German specimen hunter managed to prize the predator from the bottom bringing it into the relative safety of mid water.
After a few fraught seconds at the time of netting a small female Giant freshwater stingray was finally brought into the waiting net.
The freshwater stingray was quickly unhooked and released after measurements were taken and photography was completed 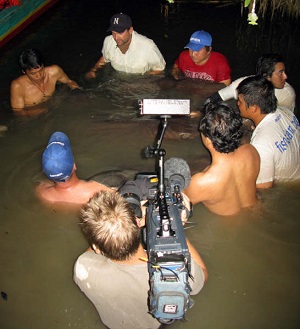