Singapore residents Murat and his young son decided to visit the Maeklong River on their Thailand holiday to fish for Giant freshwater stingrays.
After travelling down stream for over a kilometre the anglers were soon positioned on a previously productive area of the Maeklong River.

After deploying baits at various points across the tidal river the anglers waited patiently for the Giant freshwater stingrays.
With the river level rising things looked good for a bite as one of the baits was retrieved after an aborted take.

With tell-tale marks displayed on the bait it was clear that Giant freshwater stingrays were in the vicinity.

After a further hours fishing one of the floats bobbed into life and slowly started to travel upstream.
On winding down into the unseen Giant freshwater stingray the rod was pulled down and battle commenced.

On bringing the stingray to the surface the net was quickly pushed under the fish before being made safe alongside the boat.

The Giant freshwater stingray Maeklong River was estimated to weigh 45-50kg and was proudly displayed by the captors.

No further takes came to the anglers for the rest of the day and fishing ended as the river levels dropped to their lowest point. 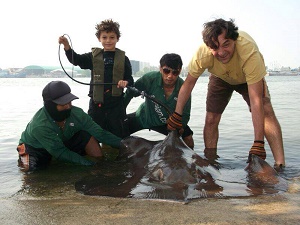