The Fishsiam team once again ventured to the mighty Maeklong River in Samut Songkran province fishing for stingrays.
After a month of record breaking results the team once again fished the infamous Area 51 stretch of river for a short afternoon session. Fishing livebaits at various marks the team experienced some extremely tentative takes without managing to hook one of the monsters that inhabit the area.
With only a few hours remaining a fast and aggressive take saw the team once again battling a Giant Freshwater Stingray.
A highly strenuous fifteen minute battle resulted in a large male Giant Freshwater Stingray being brought alongside the boat.
The monster ray was carefully towed to the riverside before scientific data was recorded.
The stingray was measured at a width of 1m and estimated to weigh 55kg’s.
The stingray was found to be in perfect condition and was observed to be a male.
The fish was returned to the river after photography 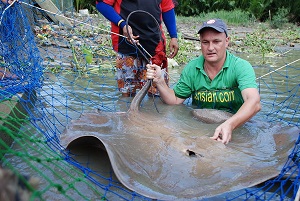