German angler Heiko visited the mighty Maeklong River near Samut Songkran for a third days fishing for Giant Freshwater Stingray.
Accompanied by Boy the angler would go on to land three Giant Freshwater stingray with weights between 40-70kg’s from the infamous Area 51 stretch of the Maeklong River.
With two stingrays being caught in the space of one hour from this highly prolific tidal river
The two smaller fish were identified as being males with the largest being a female of some 70kg’s.
One of the males was found to display an extremely pale coloration much lighter than any previously caught specimens with almost a ghostly appearance.
After scientific data was recorded and photography completed the Giant Freshwater Stingrays were safely released 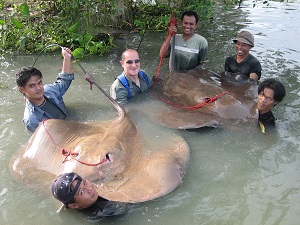