Visiting client Jason from Singapore visited IT Monster Predator Lake in Ratchaburi. Accompanied by Boy Jason latched into a string of predatory fish. In a highly productive morning’s angling Jason caught a succession of fish with Arapaima gigas to 25kg on the lure!
At some time late in the afternoon a mackerel deadbait was picked up out in the centre of the lake and a short fifteen minute battle commenced. In the final seconds of the battle a large swirl broke the surface revealing a large Giant Siamese carp. The fish was expertly netted by Boy on the second attempt. The fish was estimated to weigh in the 20kg/44lb region and was released after photography. 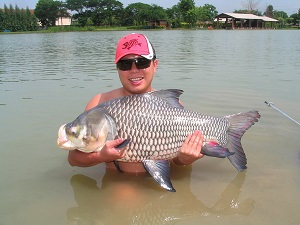