Expat angler Del visited the famous Bungsamran Lake in Bangkok in search of Giant Siamese Carp and big Mekong Catfish.
On arrival the angler fished from the public bank to a prebaited swim near the supports of the fishing platform.
Fishing with 4oz Fox Method feeders loaded with locally produced groundbait and flavourings the angler offered super sharp hooks popped up with rig foam.
Soon after casting out the bait balls a fast take saw line ripped from the spool of the reel as a fish moved away with the bait.
Winding down into the fish caused the rod to loop over indicated that a decent sized fish was on the other end of the line.
Several powerful runs later and the angler was in no question as to what species that he had hooked.
Large vortexes continually broke the surface a large Giant Siamese Carp thrashed its tail wildly in an attempt to escape capture.
Del played the fish away from the nearby supports on several occasions before it charged off towards the centre of the lake on another powerful run.
Fifteen minutes after the initial hooking saw the fish finally brought to the waiting net where it was expertly scooped up by Boy on the first attempt.
On hoisting the fish onto the unhooking mat the fish was estimated to weigh 20kg’s before being released after a short period of photography.
The afternoon passed quickly and saw Del landing a series of Striped and Mekong Catfish to an estimated 25kg’s.
After a quiet lull in proceedings and yet another large amount of bait being introduced into the swim.
A violent high speed take saw Del connected to yet another carp which proceeded to tear up and down the margins.
Continued pressure soon saw the fish succumbing to the powerful rod and being landed after a short and uneventful five minute battle.
The Giant Siamese Carp on this occasion was estimated to weigh in the region of 16kg’s the fish was released soon after a few trophy shots. 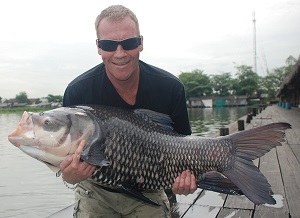