Boy accompanied by Ow and another friend visited Fishing World on the outskirts of Bangkok in Minburi fishing for Giant Snakeheads.
Using a static approach from our on site boat the anglers searched a series of snaggy marginal areas casting surface lures into likely looking areas!
After a few hours of patiently casting their fishing lures Ow was rewarded with a highly aggressive take as an extremely angry Giant Snakehead headed towards the snags!
After a few fraught minutes the angry predator was brought alongside the boat.
The predator was in immaculate condition and was weighed at a weight of just over 8.25 kgs.
The anglers fished for the rest of the day capturing one more specimen just shy of 8 kg.
Boy returned the following morning just after dawn and accounted for another Giant Snakehead weighing 6.5 kgs.
With the lake benefiting from a recent hatch of flies the Snakehead fishing had turned on big style! 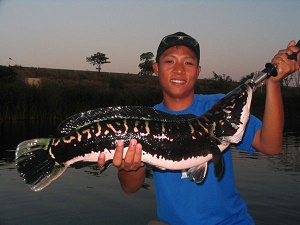