After a long drive deep into Kanchanburi province the Polish anglers had a good nights sleep on a floating bungalow before the next day of their Thailand fishing holiday.

With the water levels looking drastically down the anglers chances of catching some good sized Giant Snakehead were certainly reduced somewhat.

After making an early start the Polish fishing friends were soon exploring the massive reservoir in several boats casting lures into likely looking holding areas in search of the highly elusive and wily Giant Snakehead.

With extreme temperatures also conspiring against the anglers fishing was very demanding and the Snakehead seemed very unwilling to oblige.

With the anglers fishing different areas of the lake they managed to land a handful of small juvenile Striped Snakehead to very low weights.

The Polish anglers persevered with the lure fishing in the hope that a bigger Snakehead would fall to their carefully cast lures but with the exception of a couple of aborted takes from slightly larger fish it was clear that the bigger Giant Snakeheads were not inclined to strike with much aggression.

After Snakehead fishing for the entire day without any decent sized Giant Snakeheads making an appearance.

After fishing the anglers enjoyed a sumptuous meal of local Thai food cooked on the floating bungalow washed down with a few beers before retiring for the night and taking in the marvelous natural surroundings and wildlife of the National Park.

With the lack of action at Khao Laem Dam it was decided to return to Bangkok and visit Pilot Ponds to continue their search for Giant Snakehead. 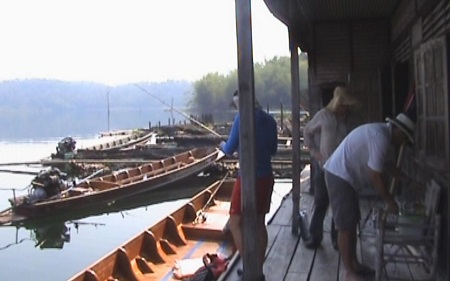