US angler Joe visited the highly prolific IT Lake Monsters fishing lake in Ratchaburi fishing for Giant Snakehead and other exotic predatory giant fish species.
The US angler began in the morning lure fishing and was soon catching Alligator Gar which aggressively attacked his artificial lures.
After landing several Alligator Gar in succession the US angler began to make casts into a quiet corner of the lake.
On the third retrieve the surface lure was once again aggressively attacked causing the rod to be pulled into its full parabolic curve.
The unseen predatory fish dived deeply down in the water before powering off towards the centre of the lake.
Joe immediately applied pressure causing the unseen predatory fish to kite on a tight line towards the bankside.
After several further minutes playing the fish in the margins a good sized Giant Snakehead was expertly netted.
The Giant Snakehead was estimated to weigh 5 kg’s and was released after a few quick trophy shots.
Joe continued to fish throughout the morning catching several more monster fish including Spotted Sorubim to 20kg’s in addition to a few relatively small Redtail Catfish.
After changing over to bait fishing techniques in the afternoon Joe was soon back into the monster fish in the shape of a good sized Redtail Catfish.
The day’s monster fishing continued in much the same manner seeing Joe landing a succession of toothy predatory monster fish with Redtail Catfish to almost 25kg’s.
Joe also caught more Alligator Gar in addition to Sharp tooth Catfish as the days fishing progressed and ended up landing a sixteen fish catch throughout his days fishing at IT Lake Monsters with fish to 25kg’s. 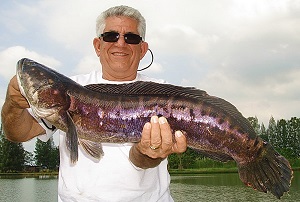