Richard Mark an angler and friend from Singapore visited the Maeklong River in search of Giant Freshwater Stingray.
Fishing from a boat under the guidance of Boy Richard soon hooked a Giant Freshwater Stingray.
After a short ten minute battle the prehistoric predator was brought alongside the boat.
The stingray was estimated to weigh 30kg’s and was identified as a small female.
With the nearby Gulf of Thailand invading the tidal river the water levels in the now swollen river were at its highest.
A slow clicking on the multiplier signaled the beginning of a long drawn out battle lasting over one hour.
Finally after over an hour yet another Giant Freshwater Stingray thrashed wildly next to the boat.
After carefully securing the fish it was brought to shallower water.
With a width of 1.4m the freshwater stingray was estimated to weigh 80kg’s and was found to be a large male.
The stingray was safely released after scientific data and photography were completed. 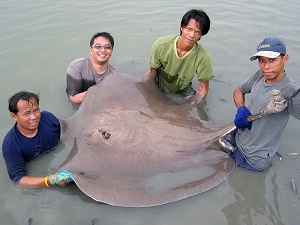