A return visit fishing at the Maeklong River Thailand by TBS TV Network from Japan saw the Fishsiam team monster fishing for Giant Stingrays.
On the previous visit TBS had captured Giant freshwater stingrays to 1.6m’s which had appeared on Discovery of the Worlds Mysteries in Japan.
The latest visit for only a short two day trip saw the Japanese TV crew monster fishing for Giant Freshwater stingrays on the tidal river.
Representatives from Chulalongkorn University were also in attendance to continue the scientific study of all Giant freshwater stingrays caught during the expedition.
An early start timed to coincide with the incoming tide saw the anglers fishing a wide bend in the lower reaches of the river.
Only thirty minutes later the anglers were attached to a large Giant freshwater stingray which began to tow the boat slowly upstream.
After repositioning the boat above the unseen monster stingray the anglers applied maximum pressure to shift the now firmly grounded stingray.
Ten minutes of constant pressure saw the stingray once again moved off of the muddy riverbed once again towing the boat behind it.
A further forty minutes passed before the Giant freshwater Stingray was finally brought to the surface revealing a massive stingray of two metres in diameter.
The stingray was identified as being a large female and estimated to weigh a whopping 200kg’s.
The prehistoric fish was carefully transported to the specially constructed holding pen at the riverside for recovery and examination by the scientific team.
Monster fishing soon resumed back on the river and it wasn’t long before another small male Giant Stingray was being placed into the holding pen.
With the tide beginning to return towards the Gulf of Thailand one last take signaled the beginning of yet another epic battle.
The battle on this occasion lasted a grueling fifty minutes and saw the Giant freshwater stingray clamping onto the bottom on several occasions.
The Monster stingray was finally beaten and brought to the waiting net where it was quickly secured alongside the boat.
The Giant freshwater stingray was observed to be a big female that was estimated to weigh 190kg’s.
After wrapping a bandage around the barb on the stingray’s tail it was placed into the holding pen to allow the fish to recover.
All stingrays caught during the day were carefully examined by the Chulalongkorn University scientific team before being released back into the tidal river. 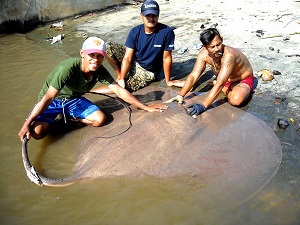