Giant Stingray in Thailand a New Hope For Vulnerable Species

Francois Pineau a returning client and friend from French Guyana in South America visited the mighty Maeklong River in Western Thailand.
The exploratory trip in search of the elusive and highly nomadic Giant Freshwater Stingray was relatively quiet and saw the angler move location on several occasions in search of his elusive prey.
A move to the estuary section in the lower reaches saw the school teacher hook what appeared to be underwater debris. A gentle tapping on the rod top revealed something had grabbed the specimen hunter?s small livebait. On retrieval of the rod a small juvenile Giant Freshwater Stingray was brought into the boat.
This miniature prehistoric fish measuring a mere 15cm?s and weighing possibly some 200 grams was a truly magical capture. The capture of this newborn female is an encouraging sign for the species which has been listed on the UNCN red list as vulnerable. It is also a good sign for the Maeklong River which has suffered in the past from pollution. 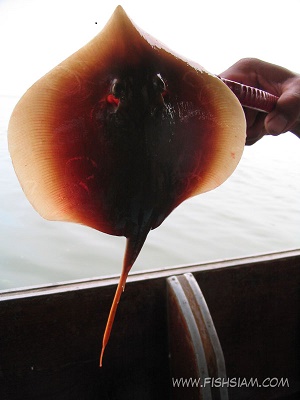