The fishsiam team joined Dr Zeb Hogan and Stefan Lovgren the National Geographic news writer on a Thailand stingray fishing expedition to find the worlds largest freshwater fish. After an eventful day which saw the team experience four aborted takes while fishing a large Giant freshwater stingray was finally hooked setting the stage for an epic one and a half hour battle between fishsiam team member Q and the unseen underwater giant .In what could be described as a David and Goliath struggle the monster Giant freshwater stingray clamped onto the riverbed on numerous occasions creating an almost unmovable weight. Each time Q expertly prized the prehistoric predator from the bottom forcing the monster to the surface. After some fraught final moments the Stone Age predatory giant was finally brought to the riverbank where it was safely secured by the team.
Footage of the entire capture and release was recorded by Dr.Zeb Hogan and Stefan Lovgren in addition to fishsiams own camera.
With the monster Giant freshwater stingray safely secured in the margins the team proceeded to record the fishs measurements and other data.
Whilst Boy was securely grasping the creatures tail the extremely large bodied stingray proceeded to give birth to a baby Giant freshwater stingray which measured a mere 34cm.
This perfectly formed Giant freshwater stingray in miniature was a particularly pleasing sign for the species proving that there is a thriving breeding population of Himantura Chaophraya present in the mighty Ban Pakong River.
The Giant freshwater stingray was recorded at a width of 1.75m and estimated to weigh in the region of 150 kg.
The Giant freshwater stingray was examined by Dr.Zeb Hogan and his team and was safely released with its newborn.
Footage of this capture will soon be featured in our video pages.
It is our understanding that this species has never been observed to give birth in its own wild and natural environment.
We feel that this latest capture can be classed as a groundbreaking step towards gaining a further insight into this most understudied of freshwater monster fish 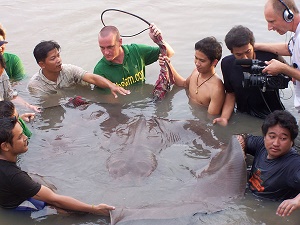