Visiting angling journalist Ian Welch from the Anglers mail joined the Fishsiam team predator fishing at IT Monster Predator Lake in Ratchaburi.
Ian bagged numerous predatory species whilst fishing this highly prolific water. Ian’s haul included Redtail catfish, Alligator gar, Sorubim and various other hungry predators.
After a brief trip to the local clinic due to a small injury caused by a lively Sorubim Ian once again began fishing.
With the light beginning to fade Ian received a savage take to a rod fished in the nearby margins with a mackerel fillet.
This would herald the start of a gruelling thirty minute battle with a 2.3m Arapaima gigas continually trying to shake itself free of the hook!
Some thirty minutes after hooking the Amazonian giant the fish was expertly netted by Boy and Jeab. The Arapaima had an extremely large girth and required five anglers to hold the spectacular creature for photography.
The Arapaima was estimated to weigh 140kg+ and was measured at a length of 2.3 metres.
The entire capture was caught on video which will be appearing in our video section shortly. 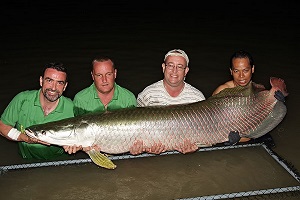