Irish angler Thomas started his Thailand holiday with a visit to IT Lake Monster on a Predator fishing trip.
On arrival the angler began fishing with lures and was soon landing several Alligator Gar and Pacu.

After changing onto bait in the afternoon the angler began catching a much better stamp of fish with several Redtail Catfish to 25kg’s falling to mackerel fillet deadbaits.
With several large Chaophraya Catfish basking in the upper layers out on the middle of the lake the angler was soon fishing a Tilapia livebait in the centre of the pond.

After a short period the live fish was picked up by a Chaophraya Catfish causing line to disappear from the reel rapidly.
Winding down into the Chaophraya Catfish saw it respond with a high speed run to the other side of the lake before it turned sharply going in the other direction.

Thomas added several more Redtail Catfish and Sorubim to his haul of monster fish before the predator fishing trip came to an end.
At the end of the days fishing at IT Lake Monster in Thailand Thomas had landed over twenty fish topped by a pristine Chaophraya Catfish of an estimated 35kg+ 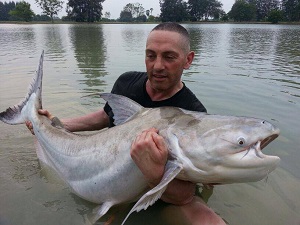