UK angler Andy starts his fishing holiday in Thailand with a predator fishing trip to IT Lake Monster.

Andy from the UK started his Thailand fishing holiday with a visit to the highly prolific IT Lake Monsters in Ratchaburi.
On arrival at the lake Andy began lure fishing casting swimbaits amongst the hordes of showing fish in the centre of the lake.
Throughout the morning the angler fished with various lures picking up several Pacu 8-9 kg in addition to Alligator Gar and Sorubim.
A changeover to bait in the afternoon saw Andy landing a succession of heavily built Redtail Catfish with weights ranging between 20-40 kg’s. Further casts produced more Pacu in addition to a good sized Asian Redtail Catfish, all taking a liking to the anglers Mackerel hookbaits.
As the afternoon progressed a bait float fished out into the centre of the pond was picked up by a decent fish which proceeded to charge around the lake. After a short but spirited battle a good sized Chaophraya Catfish was netted. The Dog Eating Catfish was estimated to weigh 30 kg’s and was released after photography.
After a quiet spell a change back to bottom fishing starting producing yet more Redtail Catfish with the angler going on to land over ten fish over the next few hours. At the end of the days predator fishing Andy had amassed a thirty fish capture composed mainly of hard fighting Amazonian Redtail Catfish to 40 kg’s with additional Chaophraya Catfish , Asian Redtail Catfish, Gar and Pacu. 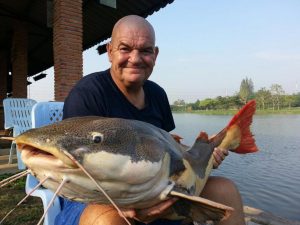