Richard Mark fished IT Monster Predator Lake in Ratchaburi. Guided by Boy the angler landed a succession of hungry predators. Richard caught several Arapaima gigas with weights to an estimated 50kg’s.
In addition the Singaporean angler landed numerous Redtail Catfish, Sorubim and Asian Redtail’s to over 30 kg’s. Richard’s large haul was caught on a combination of lure and deadbait tactics.
A fantastic days fishing at IT Lake Monsters once again 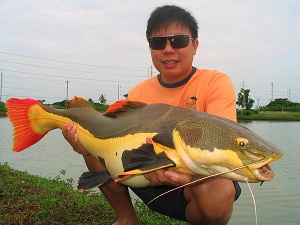