David and Alison from the UK continued their Thailand fishing holiday with a visit to IT Lake Monsters in Ratchaburi fishing for giant predatory fish. The UK anglers started lure fishing in the morning and started catching monster fish from the start.
With large amounts of live Tilapia being ladled into the lake with a landing net the predatory fish soon moved into the area and began aggressively attacking the free bait. David and Alison cast their artificial lures amongst the feeding fish prompting an immediate response from the monster fish. Seconds after casting into the baited area the anglers were both hooked up with monster fish that powered off round the lake. Both David and Alison both landed Redtail Catfish shortly after weighing 30 and 40lb respectively.
The feeding frenzy continued and saw both anglers landing several more Redtail Catfish to an estimated 40lb’s. Further casts with lures produced other monster fish species including Pacu and Alligator Gars.
As the mornings fishing progressed and sport began to slow down the anglers changed over to conventional carp fishing tactics landing several Rohu.
A change over to deadbaits in the afternoon soon saw the anglers catching more monster fish with an extremely rare golden Wallago Leerii falling to David.
The exotic Catfish being one of only two fish of this particular species known to be stocked into the lake.
As the days predator fishing continued both David and wife Alison added further monster fish species to their tally with a brace of Chaophraya Catfish landed to an estimated 50lb’s.
Towards the end of the days fishing Alison hooked an unseen monster fish which proceeded in removing the entire contents of her reel before spitting out the bait!
At the end of the days highly prolific fishing session the UK husband and wife duo had succeeded in catching a massive forty fish haul consisting of Redtail Catfish to 50lb’s, Wallago Leerii, Asian Redtail Catfish to 25lb’s, Alligator Gar, Pacu and Rohu. 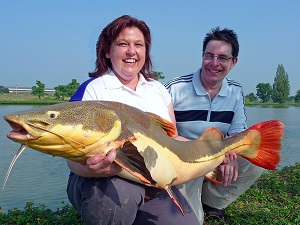