Mayfield a Chinese lure fishing fan booked a one day fishing trip to IT Lake Monsters whilst on holiday in Bangkok.
On arrival at IT the angler wasted no time in clipping on a lure and casting towards showing fish.
After several aborted strikes the angler managed to set the hook into a good sized Pacu which was landed shortly after.
Further casts produced more Pacu to 7kg in addition to several Alligator Gar’s and a bonus Sorubim of an estimated 15 kg.
A changeover to bait later in the afternoon saw the angler land a series of Redtail Catfish with weights ranging between 15-35kg’s.
Mayfield also landed a decent sized Chaophraya Catfish before the days angling came to an end.
At the end of the days fishing the angler had landed over twenty fish with Redtail Catfish to 35kg, Chaophraya Catfish to 30kg in addition to several other species 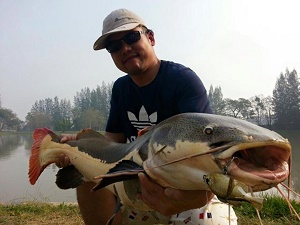