Saw Adam an English client fishing the awesome I.T monster in Ratchaburi Thailand.
Guided by Boy, Adam fished deadbait tactics to tempt a succession of hungry predators!
Adam enjoyed non stop action from a variety of species including Barred Sorubim, Spotted Sorubim and a steady stream of hard fighting Redtail Catfish with weights upto 27 kg+.
After fishing well into the afternoon Adams mackerel deadbait was picked up by a highly energetic Barramundi weighing 7 kg which proceeded to perform acrobatic leaps before finally being landed.
Adam finished the action packed fishing session at IT Lake Monster with a large Spotted Sorubim weighing in the region of 16 kg 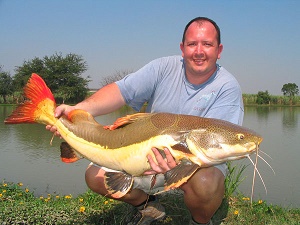