Mike continued his Thailand fishing holiday with a visit to IT Lake Monster.
On arrival the angler started fishing with lures and soon was into his first fish.

After a short but lively battle the US angler landed a small Pacu to start his days fishing.

After releasing the Pacu Mike persevered with his lure fishing and was soon adding further Pacu, Alligator Gar and Sorubim to his tally of monster fish.

A change over to deadbait saw the catch rate increased dramatically with several Redtail Catfish being landing in quick succession with weights ranging between 10-25kg.

Further casts saw the Redtail Catfish homing in on his baited area with several larger specimens being landed approaching 30kg.

As the days fishing continued the Redtail’s continually graced the bank with several catfish weighing in the excess of 35kg’s.
Mike also added Asian Redtail Catfish and Sorubim to his tally of monster fish as the afternoon progressed. 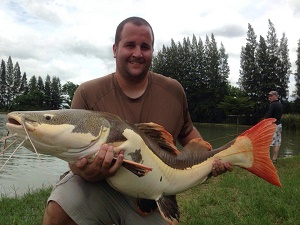