Mr.Tan returned to the highly prolific Lake Monsters in Ratchaburi. Guided by Boy the angler was soon attached to numerous hungry predators which savagely attacked the anglers surface lures.
Mr Tan’s haul included several Redtail Catfish with weights to an estimated 35kg’s in addition to various Sorubim and other Catfish species.
In the afternoon Mr.Tan after changing to deadbait tactics also landed several Arapaima gigas to 40 kg’s which took a liking to his mackerel fillets freelined in the nearby margins. 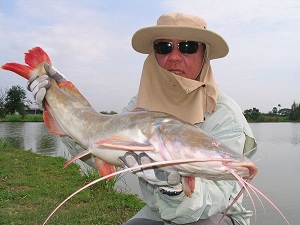