Brendan our good friend and returning client visited the Ban Pakong River in Chachoengsao province fishing for Giant freshwater stingrays.
After previously losing an unseen monster on his last stingray fishing trip Brendan finally hooked his elusive target species.
Fishing from the riverbank just outside the town, Brendan aided by Boy, Ohm and Q were forced to use a boat to extract the giant freshwater stingray from the deep.
After a thirty minute battle the stingray was finally brought alongside the boat and taken to the rivers edge.
The monster Giant freshwater sting ray was estimated to weigh in the region of 70 kgs and was released unharmed after photographs 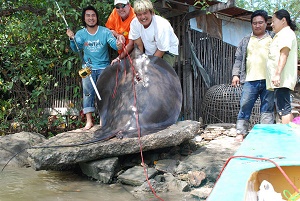