Australian anglers Amanda and Steve decided to visit IT Lake Monster for a days lure and bait fishing.
On arrival at the lake the anglers were soon tackled up with medium weight lure fishing outfits which they wasted no time in casting towards the numerous showing predators.

Amanda was first to catch with a lively Pacu on her third cast which was soon followed by Steve with a slightly bigger Alligator Gar.

A change over to bait after a slow period saw the catch rate really go up with a succession of Redtail Catfish constantly visiting their baited area with weights ranging between 10-25kg’s.

A good sized Arapaima started showing over the baited area and it didn’t take long before it picked up the anglers baited hook.

On setting the hook firmly the Arapaima exploded out of the water furiously shaking its armoured head before disappearing in a mass of bubbles and diving to the bottom of lake.
Line began fizzing off of the spool causing the angler to carefully adjust the tension on the reel.

The Arapaima once again breached out in the centre of the lake completely leaving the water in another acrobatic display before making a beeline for the nearby margins.

Several fraught moments followed as the predator thrashed away in the nearby margins before it was finally netted and placed in the recovery cradle.

The Arapaima was estimated to weigh 35-40kg’s and was released after a short period for recovery.

With several hours of fishing time left the anglers continued to offer fish sections over the baited area.
Both anglers landed some lovely Redtail Catfish which topped the 30kg mark in addition to bonus Sorubim and Asian Redtail Catfish.

At the end of the day the anglers both shared a thirty fish plus catch topped by some quality Redtail Catfish and a solitary Arapaima. 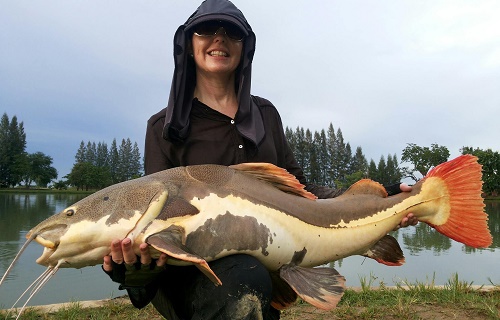