On arrival at the highly productive Pilot 111 Fishing ponds near Bangkok we wasted no time in tackling up with light gear and Owner Cultiva lures.
Staying away from the crowded bank we fished in a quiet corner and stealthily cast lures along the marginal features.

After several slow retrieves passed an aerator in the margins a large swirl saw the lure engulfed and line being stripped from the reel.
A short energetic fight followed which saw the Giant Snakehead thrashing wildly to dislodge the trebles.

The Giant Snakehead was weighed at just over 4kg and quickly released after photography.

With the commotion of the last capture clearly putting the Snakehead on edge we moved to the next pond walking round to the far side.
Snakehead could clearly be seen topping in the centre of the pond and possibly feeding on naturals.

A good cast saw the lure landing ten foot passed the showing predators, a slow retrieve immediatley induced another strike from the Snakehead with a fish of 3kg soon brought to the net.
Further casts resulted in frenetic feeding behaviour with Snakehead slamming into lures each time they were retrieved through the hot zone.

It was not long before we had captured over ten Giant Snakehead to 4kgs in addition to a bonus Striped Snakehead of around 2kg. 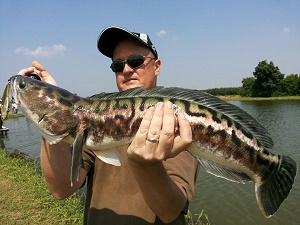