On arrival at the lake the angler was soon casting lures into one of the many ponds located on the complex.

On only his third or fourth cast the lure was savagely attacked by the first fish of the day in the shape of a hard fighting Giant Snakehead.

Hamza decided to move onto the next pond and after changing lure pattern was once again casting towards showing fish.

After several slow retrieves the lure was once again hit by another hungry predator. The culprit on this occasion was a decent sized Striped Snakehead of an estimated 2 kg’s.

After a short break for lunch the angler moved onto one of the Barramundi ponds and began casting towards the many showing fish.

After only a few casts his lure was once again hit by a good fish, which proceeded to launch itself out of the water in an acrobatic display.

The decent sized Barramundi gave a good account of itself as it was played out on the light weight spinning outfit.

Several minutes followed before the Barramundi was finally netted and then proudly hoisted up for the camera to reveal a 6.5kg fish.

Hamza continued fishing into the afternoon, adding lots more Barramundi and Snakeheads to his rapidly increasing haul of fish.

At the end of the day’s angling Hamza had successfully landed over twenty fish including Striped Snakehead, Barramundi and Giant Snakehead. 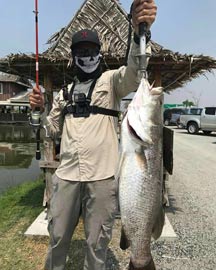