Another Maeklong River fishing trip saw Tim from Palm Tree and a client fishing at the Maeklong River for Giant freshwater stingrays.
On arrival the anglers were soon fishing a wide section of the tidal river with floats deployed at various intervals alongside the main channel.
After several hours of inactivity the anglers moved to a different location and continued fishing.
The anglers spent a very quiet afternoon waiting for the stingrays to arrive and were rewarded in the later part of the day by a slow take.
On winding down into the stingray the rod took up its full curve and battle commenced.
The Giant freshwater stingray was quickly subdued on the heavy big game fishing tackle and brought to the surface, before quickly being boated by the guide.
On inspection the Giant freshwater stingray was identified as being a small male and estimated to weigh 30-35kg.
No further stingrays were landed during the trip on what could be described as a quiet days angling by Maeklong River standards 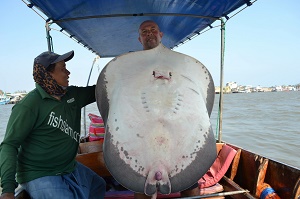