German client Peter Lipah joined Boy stingray fishing on the Maeklong River at Samut Songkran.
Fishing the famous Area 51 stretch of the tidal river the angler soon hooked a massive Giant Freshwater Stingray. After an epic hour long battle a massive ray with a width of 2.1m+ surfaced next to the boat.
The stingray was brought over a large net secured to the side of the boat and was photographed in mid river.
The stingray was observed to be a large female and was estimated to weigh 190-200kg’s and was quickly released after photography.
The massive ray was clearly larger than the previous Maeklong River record capture by Dr. Ian Welch from the Anglers Mail and stands as the largest Giant Freshwater Stingray caught from Area 51 to date.
In the final seconds of the record breaking capture another rod being fished by the team had received a take and had been patiently held by Sadaeng, now Peter turned his attention to this rod.
On reeling down into the unseen leviathan it became apparent that another monster ray was clamped to the riverbed some twenty metres below. This would herald the start of yet another battle this time lasting an arm aching forty five minutes. Once again a massive Giant Freshwater Stingray was brought over the net in mid river.
The massive freshwater giant stingray was observed to be a large female of a similar size to the first specimen with a estimated weight of 180 kg’s with a width of 1.95m’s.
The fish showed signs of damage to its tail with the majority of its tail missing. With no wound in the region it was apparent that the damage to the tail had been sustained a long time ago.
We believe that the damage could have been from a previous encounter with a boat propeller or after capture in the past by a local angler with no regard for the fish’s welfare and an ignorance of fish conservation.
The old warrior was quickly released back into the river after photography.
With still a few hours of high water still left Peter continued to fish. Only one hour later Peter once again hooked a fish which would evade capture. With the rod bent double and the roller guides creaking under the constant pressure the 80lb class rod was shattered, then moments later the hooklink was severed!
One hour later yet another take was received and this time Peter wound down hard to make contact with the benthic predator. A relatively short ten minute battle ensued with a small male
Giant freshwater Stingray brought to the surface estimated to weigh 50kg’s. The prehistoric predator was released after photography 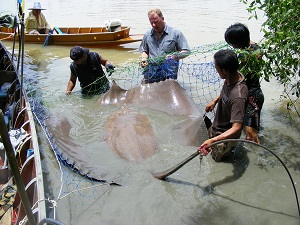