Visiting specimen hunter Geoffrey Yan from Singapore joined Boy fishing on the Area 51 stretch of the Maeklong River near Samut Songkran.
Fishing a short day session Geoffrey soon latched into a Giant Freshwater Stingray.
With the monster stingray clamping onto the riverbed on several occasions the angler was forced to pile on the pressure in an effort to raise the creature from the bottom.
After almost an hour the Giant Freshwater Stingray was brought alongside the boat and safely secured before being brought to the nearby margins.
The stingray was measured at a width of 1.2m and was identified as being a large male.
The Giant Freshwater Stingray was estimated to weigh 80kg’s and was released after photography.In addition Geoffrey landed a smaller male specimen weighing 30kg’s in his short afternoon session. 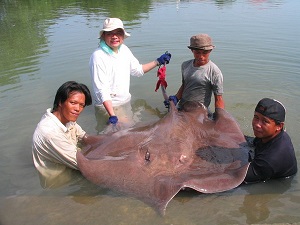