Another stingray fishing trip saw two anglers accompanied by Benny from Palm Tree Lagoon fishing at the Maeklong River in Thailand.
On arrival the anglers were soon being transported downstream to a previously productive area. After deploying baits at various points along the left hand side of the central channel the anglers waited for events to unfold.
With the tidal river slowly creeping up it wasn’t long before one of the baits was picked up by an unseen stingray as it moved off across the riverbed.
Winding down into the Giant freshwater stingray saw the rod pulled into a healthy curve as it took the full weight of the fish. After several minutes the stingray came to a halt clamping onto the bottom with unmovable force.
After repositioning the boat the angler once again applied pressure from directly above and soon had the fish on the move again.
This process was repeated several times before the stingray was finally brought over the net some twenty minutes after being hooked.
The freshwater stingray was identified as being a female and was estimated to weigh 80 kg’s.
After releasing the fish the anglers were soon back in position and managed to hook yet another Giant freshwater stingray.
The fish on this occasion was landed after a slightly shorter battle and was identified as being another female this time weighing an estimated 50 kg’s. 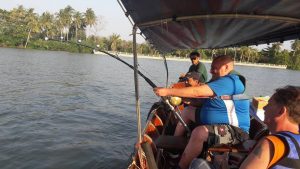