After fishing for stingrays at the Mae Klong River on the previous day and failing to catch any fish, Iron Man Malaysian anglers Ng Yam Pin and Chia were soon fishing on a new area of the tidal river.
The morning passed slowly with several baits found to be crushed on retrieval indicating the presence of stingrays in the area.
With the tidal river’s level slowly rising conditions looked good for a take.
Suddenly one of the baits was picked up. On winding down into the unseen Giant freshwater stingray it was clear that this was a big fish as it proceeded to rip several yards of line from the reel.
With the heavy duty stand up rod now bent into full compression an epic battle ensued which was to last for one hour and forty minutes and saw both anglers taking turns in fighting the River Monster.
The Giant freshwater stingray was finally brought off the bottom and played out in mid water for a short period before being brought over the waiting net.
After carefully securing the monster fish on the side of the boat it was transported to the rivers edge for photography.
The large female Giant freshwater stingray was measured at a width of 1.8 m and was estimated to weigh 200 kg’s before carefully being released back into the Mae Klong river. 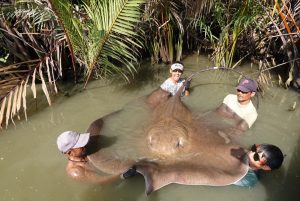