National Geographic explorer Richard Terry visited the Maeklong River in Thailand in search of Giant freshwater stingray.
With the trip arranged at very short notice and only two or three days at his disposal the stingray fishing trip was quickly organised.

On winding down into the Giant freshwater stingray the rod was pulled into its full curve as it took up the weight of the stingray.
Continued pressure saw the Nat Geo explorer starting to win the battle and ever so slowly the stingray was raised from the depths.

With a little assistance from the guides the stingray was brought over the net and quickly transported to the riverside.
Scientists from the veterinary science faculty at Chulalongkorn University in Bangkok gave the small male stingray a thorough examination before it was carefully released back to the Maeklong River.

Man vs Monster can be seen on National Geographic channel. Make sure that you tune in to watch Richard Terry and his experiences with the Giant freshwater stingray in Thailand with Fishsiam 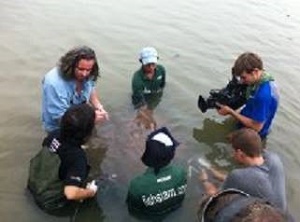