Massive Arapaima brace fishing in Thailand at IT Lake

Boy accompanied a group of anglers from England fishing at IT Monster Predator Lake in Ratchaburi.
Fishing with deadbaits the anglers experienced a succession of hungry predators.
At some time in the afternoon Ray a visiting angler from the UK hooked what can described as a fish of a life time.
After a dogged thirty minute battle a large Arapaima gigas was expertly netted by Boy.
The Amazon Arapaima was estimated to weigh in the region of 100 kg and had a length of well over two metres and was in immaculate condition.
The monster fish was released after photography.
Later that evening Ray hooked yet another large Arapaima which once again proceeded to charge around the lake.
After an arm aching thirty minute battle the Amazonian monster fish was netted.
The large Arapaima was estimated to weigh 80kg with a length of approx two metres, the fish was released after photography. 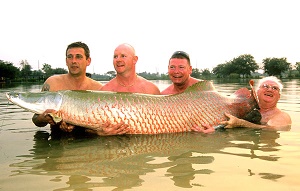