Day two of a three day trip saw German angler Heiko once again visit the Maeklong River at Samut Songkran fishing for Giant freshwater stingrays.
Fishing the infamous Area 51 section of the river the anglers waited patiently for their prey.
With the tide at its highest level a tapping on one of the rod tips developed into a fast take.
This would be the beginning of an epic one and a half hour battle which would see the anglers taking turns to battle the unseen leviathan.
Finally after ninety long minutes a massive Giant Freshwater Stingray was brought to the surface.
With a width of 1.40m the large male Giant Freshwater Stingray was estimated to weigh 80kg’s.
The stingray was safely returned after scientific data and photography were completed. 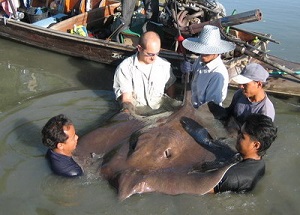