Richard Mark from Singapore returned on a fishing trip to Bungsamran Lake in Bangkok.
Joined by a friend Richard fished from the public area into the centre of the lake.
Guided by Boy the anglers quickly cast out sliding float set-ups into the centre of the lake to showing fish.
Richard fished a sliding bung on a fluoro leader attached to a feeder loaded with local groundbait attached to short braided hooklength and Owner Hook baited with bread crust.
With the float having barely settled on the surface it immediately leapt to life as 2 metres below a Mekong Catfish moved off with the baited hook.
Richard immediately wound down hard into the fish setting the hook in its bony mouth.
The fish responded by powering off towards the furthest part of the lake ripping yard upon yard of line from the spool.
A fifteen minute battle ensued which saw the angler and his tackle tested to their limits.
The fish was finally netted by Boy before being hoisted onto the unhooking mat after unhooking the Mekong Catfish it was estimated to weigh 30kg’s.
This fish would herald the start of an action packed day which would see the anglers landing a succession of Mekong Catfish at Bungsamran Lake with weights between 15-35kg’s.
On several occasions the anglers would receive takes at the same time requiring both anglers to battle monster catfish while Boy raced between them untangling lines and finally netting the fish in the same net.
After fishing a short but highly productive session the anglers had amassed a massive twenty five fish with Mekong Catfish to 35kg’s and Striped Catfish to 12.5kg’s 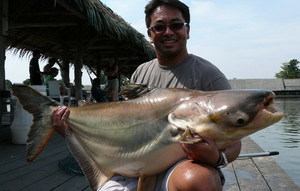