Yvonne from Singapore accompanied by her husband visited the famous Bungsamran Lake in Bangkok Thailand fishing for Mekong Catfish.
After commencing the session fishing from a private fishing bungalow the anglers cast sliding float set-ups towards fish showing in the centre of the lake.
After fishing for only a matter of minutes one of the floats was dragged under the water causing line to be ripped from the spool of the reel.
On closing the bale arm of the reel the rod was violently dragged down towards the water as a large Mekong Catfish powered off with the bait.
A ten minute battle ensued which saw the female angler trying to bring the monster catfish under control.
After a few fraught moments at netting which saw the monster catfish attempting to enter the underwater snags the fish was finally hoisted onto the unhooking mat.
The Mekong Catfish was estimated to weigh 20kg’s and was released after a few quick trophy shots.
After repositioning the rods out in the centre of the lake Yvonne’s husband was soon attached to another big Mekong Catfish which charged off across the lake.
On this occasion the battle was slightly longer than the previous fish testing the angler to his complete physical limit.
The Mekong Catfish on this occasion was estimated to weigh 25kg’s and released after photography.
The anglers fished for the remainder of the day catching a succession of monster fish with specimen sized Striped Catfish to over 10kg’s in addition to several further Mekong Catfish to an estimated 30kg’s. 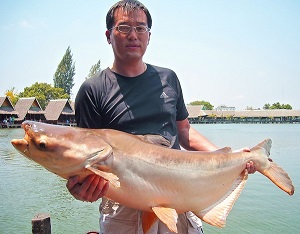