Fishing with several rods the guys were soon attached to hard fighting Mekong Catfish which tested the anglers strength to the limit.

Fishing with sliding float presentations the anglers fished at various depths to tempt the Giant Catfish.

All of the guys by lunchtime had already landed catfish to over 20kg’s and the action continued throughout the afternoon with lots more Mekong Catfish landed between 15-35kg’s.

As the afternoon wore on Lee managed to hook another much bigger specimen which powered off on a series of runs across the lake.

After a fifteen minute battle the Mekong Catfish was finally brought to the waiting net and hoisted onto the mat.

The Mekong Catfish was estimated to weigh around 60 kg’s and was proudly held aloft by the captor.

Further casts saw even more Catfish landed with another large Mekong Catfish being landed of a similar size.

After the days Bangkok fishing trip had ended the guys boarded their minibuses and headed towards the bright lights of Pattaya to end their Thailand holiday with a few days of Golf. 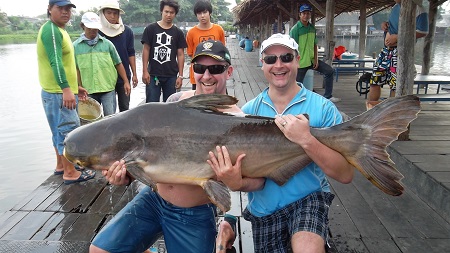