The fourth day of fishing at Bungsamran Lake in Bangkok once again saw Mark from the UK fishing on the public bank.

The UK angler decided on a change of tactics and fished method feeders hard on the bottom in an effort to catch a Giant Siamese Carp.
Fishing large melon sized balls of groundbait with super sharp Owner hooks the angler gently lobbed the balls to a nearby marginal area.

After only ten minutes the angler bent the rod into the first fish of the day landing a small Striped Catfish after a short but lively battle.
The Striped Catfish was estimated to weigh 9kg’s and was released after a few photographs.
Recasting the feeder to the same area resulted in another high speed take from another small Striped Catfish of a similar size.
The angler continued to bait the swim with small amounts of groundbait in between takes in an effort to draw in any larger fish in the immediate area.
After catching several more Striped Catfish the angler hooked into a much larger fish which proceeded to tear off at break neck speed in the direction of the far bank.
Applying as much side strain as humanly possible resulted in the large Catfish changing direction and ploughing about in the centre of the lake.
Mark battled the Mekong Catfish for a further ten minutes before it was finally netted by Nok on the first attempt.
The large Mekong Catfish was hoisted onto the unhooking mat and was estimated to weigh 30kg’s.
The angler caught steadily throughout the day catching a succession of good sized Mekong Catfish and Striped Catfish.
During the course of the days fishing several fish were lost due to the fish cutting off the angler on the fishing platform.
At the end of the days fishing at Bungsamran Lake Mark had successfully landed a double figure haul with Mekong Catfish to 30kg’s and Striped Catfish to an estimated 10kg’s. 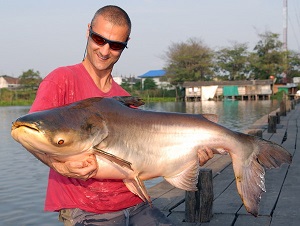