Alan from Singapore visited the highly prolific Bungsarlan Lake in search of Mekong Catfish.
Alan and his friend were joined by Boy and fished from the public area using sliding float set-ups with bread hookbaits.
The anglers landed a succession of monster catfish with Alan landing a 40kg+ beast in addition to various other Mekongs with weights to over 30kg’s.
In addition the anglers caught several Striped Catfish with weights upto 12.5kg 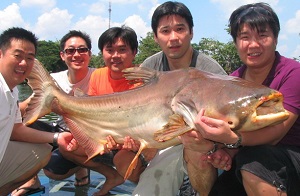