Visiting angler Guy and his young whilst in Bangkok decided to book a short days fishing at Bungsamran Lake in Bangkok.
With limited time at their disposal the visiting anglers were soon fishing from a stilted bungalow in a quiet part of the lake.

After casting out two rods rigged up with sliding floats and inline method feeders the anglers waited patiently for vents to unfold.

Only minutes after casting out one of the floats burst into life as it was dragged across the surface before sinking under the water.
With line streaming from the spool of the reel the bale arm was closed and battle commenced.

The unseen Mekong Catfish embarked on a series of unstoppable runs towards the centre of the lake causing the young angler to hold on for dear life.
After a further ten minutes of fighting the catfish the Mekong Catfish began to show signs of tiring and broke the surface just out of netting range.
After several fraught moments at netting the Mekong Catfish was finally netted and hoisted onto the fishing platform and mat.
The Mekong Catfish was estimated to weigh 25kg’s and was released after a few quick trophy shots.

After regaining their composure the anglers once again cast back towards the hordes of showing catfish in the central part of the lake.

Further Mekong and Striped Catfish soon followed with several fish taking the bait at the same time causing both anglers to battle Mekong Catfish in unison.

With limited time at their disposal the anglers fished at Bungsamran Lake for just over three hours.
During their three hour fishing session the anglers succeeded in landing over fifteen hard fighting Catfish with Mekong Catfish to an estimated 30kg’s and Striped Catfish to 10kg’s. 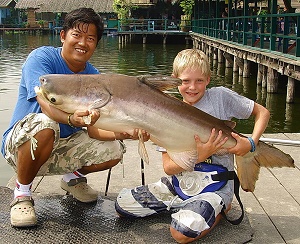