After making an early start, Gregard from Norway started fishing on the public bank at Bungsamran Lake and cast out large balls of groundbait suspended under sliding floats.
After barely settling one of the floats slid under the water as a Mekong Catfish charged off with the bait.
The unseen Mekong Catfish charged powerfully away towards the far bank stripping line from the tightened spool of the reel.
A ten minute battle followed which saw the Mekong Catfish embarking on a series of equally powerful runs.
The Mekong Catfish was finally landed and hoisted onto the unhooking mat for photography.
The Catfish was estimated to weigh 15kg’s and was released after photography.
Further casts to fish showing in the centre of the lake resulted in Mekong Catfish of a similar size being landed.
After making an alteration to the depth of the sliding float the angler once again cast towards showing fish.
Several minutes later the float disappeared and line began to stream from the fixed spool reel as a fish rapidly moved off with the bait.
On winding into the fish it was clear that this was a much bigger specimen which hugged the bottom tightly on its first 60 yard run.
After several more extremely powerful runs the angler managed to momentarily regain control over the fish bringing it within 30 yards of the bank.
After ploughing around for a few minutes deep down in the water the fish decided to wake up and began to move towards the centre of the lake.
Ten minutes passed which saw Gregard and the fish locked in a stalemate with neither wanting to give an inch of line.
The large Mekong Catfish surfaced on two occasions taking large gulps of air before diving back down to the bottom.
The Mekong Catfish was once again brought to the surface a few yards out of netting range where it was slowly eased back towards the waiting landing net.
On hoisting the fish onto the unhooking mat it was observed to be a very good size and was estimated to weigh in the region of 45-50kg’s.
The large Mekong Catfish was released after a few quick trophy shots.
Gregard continued to fish for the remainder of the afternoon catching a succession of Mekong and Striped Catfish with weights between 8-25kg’s.
At the end of the days angling the Norwegian angler had amassed a fourteen fish haul consisting of Striped and Mekong Catfish to an estimated 50kg’s. 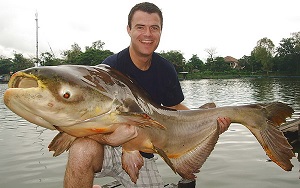