UK anglers Rob and Andy visited the Ban Pakong River near Chachoengsao in search of Giant Stingrays.
Making an early start the anglers boarded a boat and headed upstream to a previously productive area.

Large deadbaits were mounted onto big Owner Circle hooks before being lowered down into the murky depths of the river.

With the river looking to be in perfect condition the anglers waited patiently for a bite from the legendary Giant Freshwater Stingrays which inhabit this famous stretch of the Ban Pakong River.

Fishing numerous baits at various intervals across the river had accounted for not even one bite before lunch time leaving the anglers to ponder on their choice of venue.

After a short break for lunch the anglers traveled further down stream in an attempt to locate the elusive Giant Stingrays.

Rob and Andy fished throughout the day and failed to experience a take from a freshwater stingray.

Moving location several times saw the anglers frustrated by the lack of action and trying their hands at a more traditional approach of angling with hand nets for the masses of small fish that also inhabit the tidal river.

At the end of the days angling the anglers returned to their hotel to rethink tactics for the next days fishing at the Ban Pakong River. 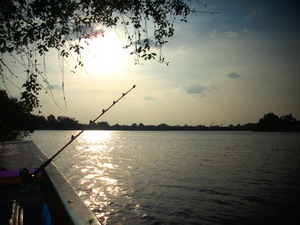 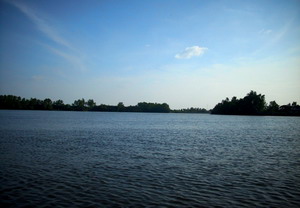