Father and son Dean and Lee from the UK land a monster Giant freshwater stingray whilst fishing at Maeklong River.

Another stingray fishing trip to the Maeklong River saw UK anglers Dean and Lee accompanied by Tim Webb from Palm Tree Lagoon.
After making an early start the anglers were soon positioned on a wide bend in the lower reaches of the tidal river with baits positioned along the main channel.
Very little happened during the first few hours fishing until the incoming tide began to push up the level of the river bringing with it a much appreciated bite from a Giant freshwater stingray.
On winding down into the unseen River Monster it was soon apparent that they were attached to a big fish.
An epic 1.5 hour battle followed which saw father and son both taking it in turns to fight the monster Giant freshwater stingray as it embarked on a series of unstoppable runs interspersed by long periods being clamped onto the muddy riverbed.
After finally bringing the stingray off the bottom one last time the anglers were able to bring the fish into midwater where it was slowly brought to the surface.
After netting the Giant freshwater stingray it was secured alongside the boat and transported to the rivers edge.
On inspection the stingray was observed to be a large female with a width of 2 m’s and was estimated to weigh 230 kg’s.
The fish was then released back into the Maeklong River after photography.
Then anglers continued to fish for the rest of the day and experienced several aborted takes and crushed baits, but unfortunately failed to land any further stingrays. 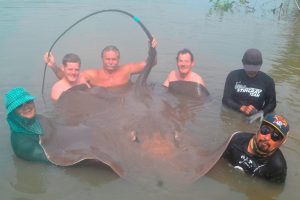