UK angler Dave started his fishing holiday with a trip to the Ban Pakong River fishing for the true freshwater giants of Thailand the Giant freshwater stingray. The UK angler was soon positioned in a previously productive stretch of the tidal river where the Fishsiam team had caught numerous monster fish with National Geographic and Zeb Hogan in the past.
The UK angler fished with heavy big game fishing equipment and positioned large livebaits at various parts of the tidal river in anticipation of the arrival of the monster fish.
The day passed quickly and saw baits retrieved on several occasions which had been crushed by giant stingrays.
With the days monster fishing almost finished one of the baits was picked up by a monster fish.
UK angler Dave wound down into the giant fish causing the rod to pull over into fighting curve as the giant stingray moved away with the bait.
The rod creaked as it took the full weight of the monster fish as line was slowly pulled from the spool of the large Okuma multiplier.
Dave battled the giant fish for fifteen minutes which saw the monster stingray embedding itself into the muddy bottom of the tidal river.
After successfully prizing the giant fish from the muddy substrate on several occasions the monster fish was brought up into the middle layers of water.
The monster fish was carefully played out in mid water for several more minutes before it was finally brought up to the surface.
The Giant Stingray was estimated to weigh 90 kg’s and was quickly photographed and measured at a width of 1.49m’s before being released back into the river.
With a few more hours left for stingray fishing Dave continued fishing and was soon rewarded with yet another Giant freshwater Stingray.
The giant fish on this occasion was estimated to weigh 60kg’s with a width of 1.25m’s and was quickly returned to the river after a few quick trophy shots.
Although the monster fish only weighed 90 kg’s Dave was delighted to have caught his target species and looked forward to further encounters with the freshwater Giants of Thailand in the coming days of his fishing holiday 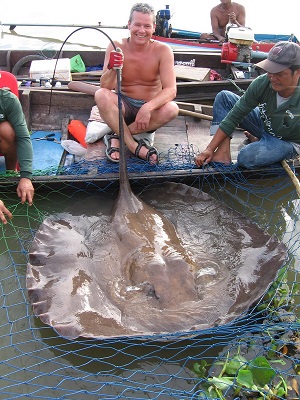