Tim from PTL and Andrew returned to the Mae Klong River in Thailand fishing for Giant freshwater stingrays.
Andrew and Tim had fished together previously and failed to catch a stingray with only Bull sharks to show for their efforts.
After positioning themselves on a wide part of the tidal river the anglers waited for action to follow.
Soon after, one of the floats signalled a take.
Winding down into the fish saw the heavy duty big game rod bent almost double as it took up the full weight of the stingray.
An epic ninety minute battle followed which saw the Giant freshwater stingray making powerful runs before clamping firmly to the riverbed.
The Giant freshwater stingray fought hard all the way to the net testing the angler’s endurance to its limits.
The monster stingray was identified as being a female and was measured at a width of 2.16m’s, with an estimated weight of 530-550lb’s.
The Giant freshwater stingray was allowed a period for recovery and photography before being released back into the Maeklong River.
No further action followed before the days angling came to a close 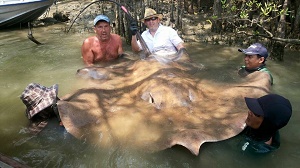