The third day of their Thailand fishing holiday saw Nigel and Caroline from the UK stingray fishing for Giant freshwater stingrays on the Maeklong River.
With the coming of the first tide the anglers were soon positioned on a wide bend in the lower reaches of the tidal river.
Fishing with Okuma 80lb stand up rods coupled with Okuma Makaira multipliers the anglers fished with large livebaits mounted onto big Owner Circle hooks.
Large 1kg weights were used to hold the bottom in the fast water of the tidal river.
With the tide at its highest one of the rod tips began to knock as something mouthed the bait twenty metres below.
Moments later line began to peel off of the reel as a monster stingray moved away with the bait.
On winding into the unseen Giant freshwater stingray the rod was pulled violently down towards the water.
The battle commenced and saw both Nigel and Caroline taking turns in trying to bring up the monster stingray from the depths.
The anglers fought the fish for almost three hours and had managed to bring the stingray off of the bottom into mid water when disaster struck.
After prolonged abuse from the stingrays abrasive tail the fluorocarbon leader finally broke causing the heavy duty big game rod to spring back!!
With the water conditions making fishing now impossible the anglers visited a local restaurant for a break.
With the next tide now returning the anglers were soon back in position on the tidal river in readiness for the next feeding time.
It was not long before another take was received which saw Nigel and Caroline once again doing battle with another stingray.
Yet again disaster struck and floating vegetation caused another Giant freshwater Stingray to be lost.
With only a short period of time left before the tide receded the anglers repositioned their baits for one last time.
Shortly after another take was received on one of the baits and battle once again commenced.
On this occasion the newlyweds once again battled the unseen Giant freshwater stingray for another epic three hours.
Both Nigel and Caroline took turns in battling the monster stingray which tested both the fishing equipment and anglers to their absolute limits.
The monster stingray was finally landed after three hours by an extremely tired pair of anglers and was brought to the riverside in a large net.
The large Giant freshwater stingray was observed to be a female with a width of 2.35m’s with an extremely short stumpy tail caused from aggressive mating previously.
The Giant freshwater stingray was identified as being a stingray caught seven months previously by the team on ‘Childrens Day’ whilst fishing for the local government which gave birth to a live newborn after the previous capture.
The Giant freshwater stingray is the widest stingray that the Fishsiam team has caught to date and was estimated to weigh 210-220kg’s.
The newlyweds posed proudly for the photos in full wedding gear and jointly celebrated the capture of one of the largest freshwater fish ever caught and the beginning of their honeymoon. 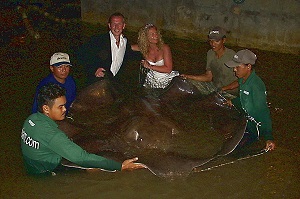